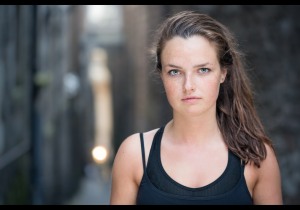 Taking a brief break from email whilst travelling with work, I zipped out from the hotel with my camera and a couple of reflectors. Edinburgh has spent the late afternoon bathed in searing golden sunshine, and there was a slight sense of festival in the air. Heading up to the Royal Mile in search of an interesting alley way that could serve as a background, a sudden bank of fog swept in from the sea, swirling around spires and softening the light. People, I sensed, were curtailing their evening’s out and heading home, as what had felt like August suddenly felt more December. Not Tara. Runners have generally rejected offers of a portrait. People are focused on their exercise, no doubt, and some, I imagine, self conscious about their exertions showing in a photograph. Tara, as she explained, had gone for a run in the meadows, and, upon seeing that fog was due, had then run up the (not insignificant) hill to meet her friend Roisin on the Royal Mile, so as to march up Arthur’s Seat for the eerie view. Whilst Roisin deconstructed a market stall, Tara had a moment’s wait and agreed to be part of the project. Tara moved to Edinburgh for her studies, focusing on social science for the range of subject matter it encompasses. If not Edinburgh born, the local spirit was very much in evidence – assuming a fantastically direct stare, every bit as powerful as you’d hope for from someone who runs up a hill to organise marching up another, in the fog, “even though it might be s#%t!” (her words). Thank you Tara for taking a moment to be part of the project! Hope you like your portrait, and it was awesome to hear about the view from the top over the fog, the city glowing beneath. Congratulations on seizing the opportunity – totally awesome. Roisin was super too, by the way – joining in to help with lighting. She’s holding a soft gold trigrip reflector 45*/45* camera right, bouncing a Canon 600EX-RT on ETTL at -1 adjustment. Tara’s got a reflector too, held just below shot. This is portrait #79 of my 100 Strangers Project – check out the group page and get involved. You might also enjoy my photography blog, including tips for street portraits. It’s relatively new, but growing quickly and I’d appreciate a visit and your thoughts!