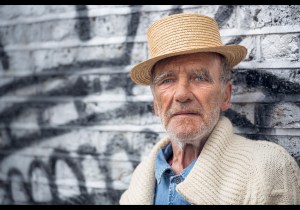 Saturday just gone saw another 100 Strangers photographs meet up on Brick Lane. The last time I did that, two years and a half years, and 88 strangers ago, was when I kicked off my project proper. It was great to be out with everyone, putting faces to Flickr handles and enjoying a day away from the work that’s keeping me from 50 odd Gb of holiday pictures I want to share!

Having met up and grabbed some coffee (or cake in my case), we were just filtering out of the café – myself mid conversation – when I saw Mick cruising down Brick Lane with a large green enamel cup of tea. Turning mid sentence on my heel I (probably very rudely) quit the conversation and sprinted off ahead. A couple of minutes later, with a passable background tested, I turned and hailed Mick as he caught up.

What a fine man he was.

Agreeing to the photograph, we chatted about his life time in the area, his work at the Truman Brewery and the changes he’s witnessed. IT turns out he is something of a local celebrity, encouraging me to Google him – leading to this short film by Nikalas Catlow. It gives a superb portrait of the man himself.

Before I could show him my intended background he settled against this artwork, and it seemed appropriate. The new wave of art against the London brick, and the timeless character of its people together in comfortable juxtaposition.

Though I did grab another passerby to have them hold a reflector, this shot from when it was just Mick and I was the best – a more direct portrait of his dignity than when others became involved and diluted the intensity of our discourse.

Thank you Mick – you’re a gentleman.

This is portrait #94 of my 100 Strangers Project – check out the group page and get involved.