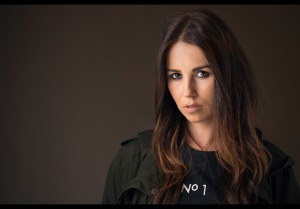 The cliche goes that South African cities are kind of dangerous places.* When Yolandi, Mish and Knowles balanced asking whether they were safe to wear jewelry in Soho with agreeing to an impromtu photoshoot, I realised the truth was far more nuanced.

I’d been out with the awesome Arnab in Soho after work – taking lots of pictures of each other in front of a series of viable backgrounds, we’d failed to meet anyone that would spark off them. Late on now, we were ready to wrap things up – Arnab was whizzing around the block looking for people, whilst I stood at the top of Carnaby Street guarding our collection of lighting stands and other photographic paraphernalia.

Carnaby Street is one of those villainous London streets that combines a high volume of interesting people, with a logo-festooned, roller shuttered paucity of backgrounds. Just as Arnab returned, however, my eye fell on a temporary hoarding outside a shop that was being refurbished. The matt black wooden boards were washed with orange sodium vapour light – maybe a chocolate studio backdrop in the making?

That’s when I heard Mish, Knowles and Yolandi – over in London with work on a team building, exchange event. I’d have asked based on the noise alone – a wild lightning cloud of whopping laughter and high spirits. Seeing Knowles and Mish had amazing coloured scarves, I thrust my kit at Arnab and took off up the street.

Once they’d agreed and backtracked a little way, and asked about the general safety of the area, we got to shooting – juggling lights and reflectors in turn. Although it’d been the high spirits and bright scarves that had initiated the encounter, when actually shooting Yolandi took on so direct, so compelling an intensity, in fact that’s the one I felt would make the best lead shot.

That said – all are processed! So – if you’re reading girls, please do email so I can whizz the files across to you! Thank you so much for stopping – and for getting your own back with a shot of Arnab and I. Hope you had an awesome trip and safe travel home.

The lighting is based on a technique I’ve tried to explain on my new photography blog – using umbrellas both as a flash modifier, and to diffuse street lamps. If you were interested in the technique, please do check it out and let me know what you think!

In terms of basic stats, the lighting is primarily from a Canon 600EX-RT @ 1/128 blocking out street lamps, camera left at 30* and slightly feathered down through a 43″ white shoot through umbrella from above eye level, courtesy of VAR extraordinaire Arnab. That’s also got a clip on diffuser on it to pull the power back even more. Yolandi’s friends Mish (camera right) and Knowles (just below the shot) are holding silver reflectors. There’s a second Canon 600EX-RT behind Yolandi shooting at 1/64 onto the background, through it’s built in diffuser.

Apologies to those who commented on the version posted yesterday – I noticed a tiny edge of the reflector in the image which I couldn’t live with! Hence the reposting!

This is portrait #88 of my 100 Strangers Project – check out the group page and get involved.

*Even with Colin over here in London.