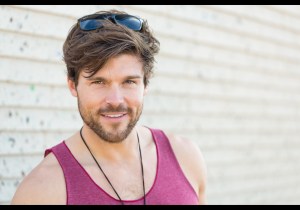 Robbie and Ashley had whizz end in to Blackpool from Manchester to enjoy a sunny Sunday afternoon and make sure they didn’t “waste the day” after a – by the sounds of it – pretty raucous Saturday night.

It’s amazing the impact the first stranger one meets can have on a whole outing. After two previous Sanger expeditions in Blackpool where I hadn’t even asked someone for their portrait, Robbie’s lively charisma and energy was so infectious that with this first shot taken, I went on to a busy, fun afternoon thereafter.

I’ve really enjoyed people’s kind thoughts where several “versions” of a stranger portrait clash for the mantle of “official project shot”. I’ve posted two here again. The first one is a little moodier, a little more staged, a little more “my shot”, but it’s one that Robbie seemed to view as someone else. So we shot a couple more, and got this one which he thought his “mother would like”. I think it keeps his rugged masculinity, but does a better job of showing his charisma and playful energy; hence it’s the one I’m using in the project. Your thoughts would be very welcome as always!

Technically, it’s my second shot with two reflectors – Robbie is holding a large golden one, whilst Ashley stands to camera left, close in with a sunfire reflector vertical to his face. I’m thinking even of adding a third, and dropping the on camera softbox I’ve used before (not on this shot). The light feels smoother, you’re much more mobile, at f/3.2 it gives better shutter control than possible when syncing, WB feels better and, most importantly, it gets as many passersby/strangers friends involved in the shot as possible. There’s a great team dynamic that way, that’s fun to be part of and gives a buzz to the shoot that comes across in the images.

Robbie and Ashley – many thanks for agreeing to stop and being so patient with the two series of images we shot. Hopefully you like the results, and had a great afternoon enjoying the sunshine and sand.

This is portrait #56 of my 100 Strangers Project – check out the group page and get involved.