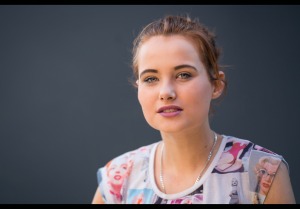 Chloe and her friend Emma had just finished a Sunday afternoon’s work and were headed into town, when they agreed to an interruption to their schedule. Chloe agreed only on condition she would look bold in the finished image. I hope we’ve achieved that!

It’d been Chloe’s awesome Marilyn Monroe t-shirt that had first caught my eye, and I wanted a background that would let it stand out, without becoming a distraction from Chloe. A simple grey silver along a shop front was just wide enough to offer that.

Once again I tried the two reflectors together – Chloe holding the larger gold one, whilst her friend Emma stood as close as possible to the camera left, with the sunfire reflector vertical to Chloe’s face. I really like the light it created, yet think next time around I’m going to swap them around, so that the subject isn’t burdened with the larger, much wider reflector – which can be a little hard to hold and pose with.

As we shot I chatted more with her friend Emma who shoots portraits of visitors to the Sealife Centre just around the corner. As well as that, she creates video projects of her own including one which Chloe fiercely endorsed about the Kray twins.

Send me a link guys! Thanks for stopping and I hope you like the outcome.

This is portrait #57 of my 100 Strangers Project – check out the group page and get involved.