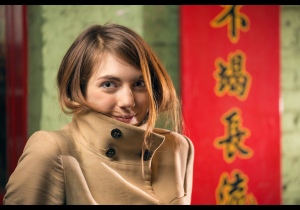 Clara was the third stranger brave enough to join Bomvu and I in Chinatown’s back alleys to shoot an off camera flash street portrait.

This is portrait #32 of my 100 Strangers Project – check out the group page and get involved.

Meeting Clara ranks up there as one of the most surprising, serendipitous and fun moments of my 100 Strangers Project to date, because as I pitched her on the idea of a street portrait, she launched into an all out, one part enthusiastic, one part skeptical, interrogation of my street photography credentials.

I think I probably failed on multiple counts – Clara knows way more about street photography than me. I had “Humans of New York” confused with “Hunts Point”, for instance. It was a fantastic education in people I was largely confused or unaware of!

Clara – thanks for the forthright approach. I hugely enjoyed being put straight on the range of topics I had back to front and have really enjoyed exploring some of the names, projects and photographers you shared. Also, thanks to Richard for his patience and juggling of lenses/bags/etc. Hopefully you guys had a great evening despite the interruption!

Colin is also holding a reflector just beneath her to the right, bouncing some of the light back into her face/hair.