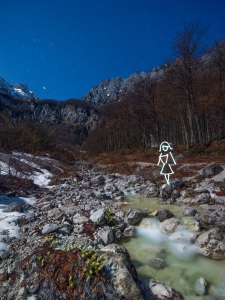 Downstream of the snow cave where I shot Hollow World, the Savinja stream tumbles out of the haphazard snow across a rocky scree. After a couple of evenings shooting in eerie forest and pits in the snow, it was refreshing to be out in the open.

Even so, composing the shot was remarkably hard without my usual standbys of Hunters or Crocs. There’s probably not enough water in this one as a result of my not braving the meltwater barefoot in the darkness. That said I do rather like the odd plants in the foreground – if anyone knows what they are, I’d be interested in knowing,

As always with my light paintings, all the lines are hand drawn in camera with an LED. I only wish I’d been more ambitious lighting the scene around the figure. 明日があるさ…

The shot itself is a vertorama of three frames, using the “shift” function on the TS-E 24mm.

Thanks to everyone that commented on the snow cave shot and helped it into Explore – the thought and time is hugely appreciated.